So, we are getting several queries about when the fixtures for the new season will be published. At the recent AGM we published the following dates:

I also explained that our ability to create fixtures was very much dependent on Clubs completing at least Step 4 of their Affiliation process.
Clearly the relationship between these activities I gave was not understood, so here it is as a diagram: 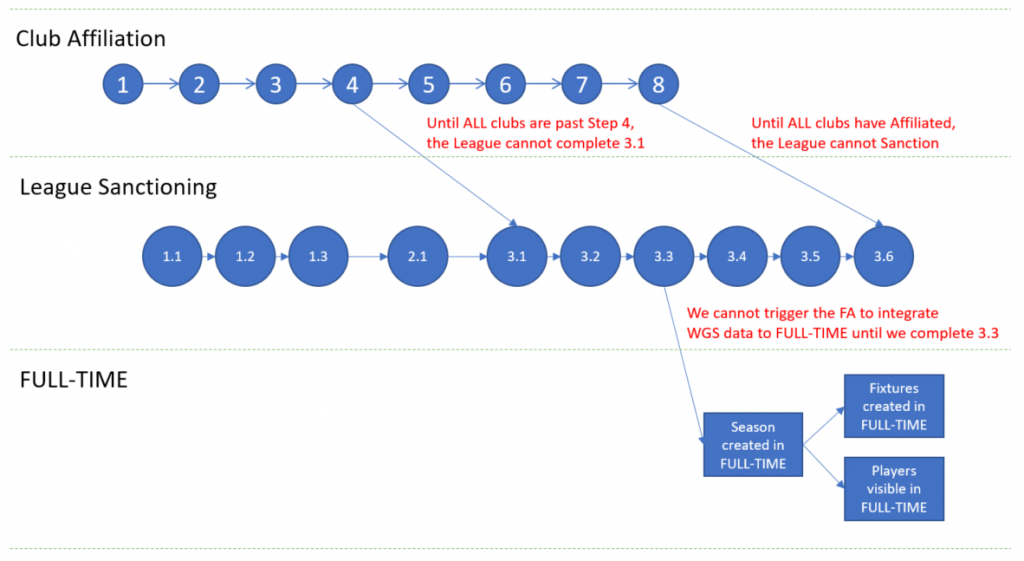 So not only do all Clubs need to have completed Step 4, all the teams need to be associated to the NWYFL, need to have the same name that was previously agreed in the Constitution, be in the right age group and playing the right format (9v9 or 11v11).

If any of this is wrong, then we cannot see the team or place the team in the right Division (Step 3.1). This is not something we as a League can correct, we are dependent on Clubs or the County FAs to make the corrections.

It’s nearly 3 weeks past the Affiliation complete date, and we have still not completed Step 3.1

Hopefully the final issue will be addressed today, and we can request the FA to integrate our WGS data to FULL-TIME, thus creating the new season. We will be in a queue, we don’t know how long we will have to wait.

Once we have been integrated we can start on venues, fixture scheduling & checking for all the Divisions before we can publish. We have lost 3 weeks, so the date of week commencing the 6th August is at risk.

FYI, as of this morning, there are 14 Clubs that have not yet fully completed the Affiliation process, i.e. have an Affiliation Number.