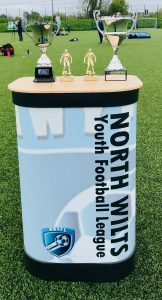 Congratulations to all the teams that took part in the Mini Soccer Finals at Gerard Buxton on Sunday 28 April.  It was great to see all players enjoying themselves in what were seven closely competed finals.

Your Sport Swindon filmed all 7 games, and highlights will be posted on their website:

Individual and team photographs will be available to purchase from Jeff Youd Photography https://www.jeffyoudphotography.co.uk/

Thank you to all the players, coaches, spectators and League committee members for contributing to a successful and enjoyable day.

A final thanks to all those who contributed to the charity collection for SMASH Youth Mentoring (http://smashyouthproject.co.uk/).  The total of £115 will be added to the collections from the NWYFL League Cup Semi-Finals, and the forthcoming League Cup Finals (18th & 19th May).