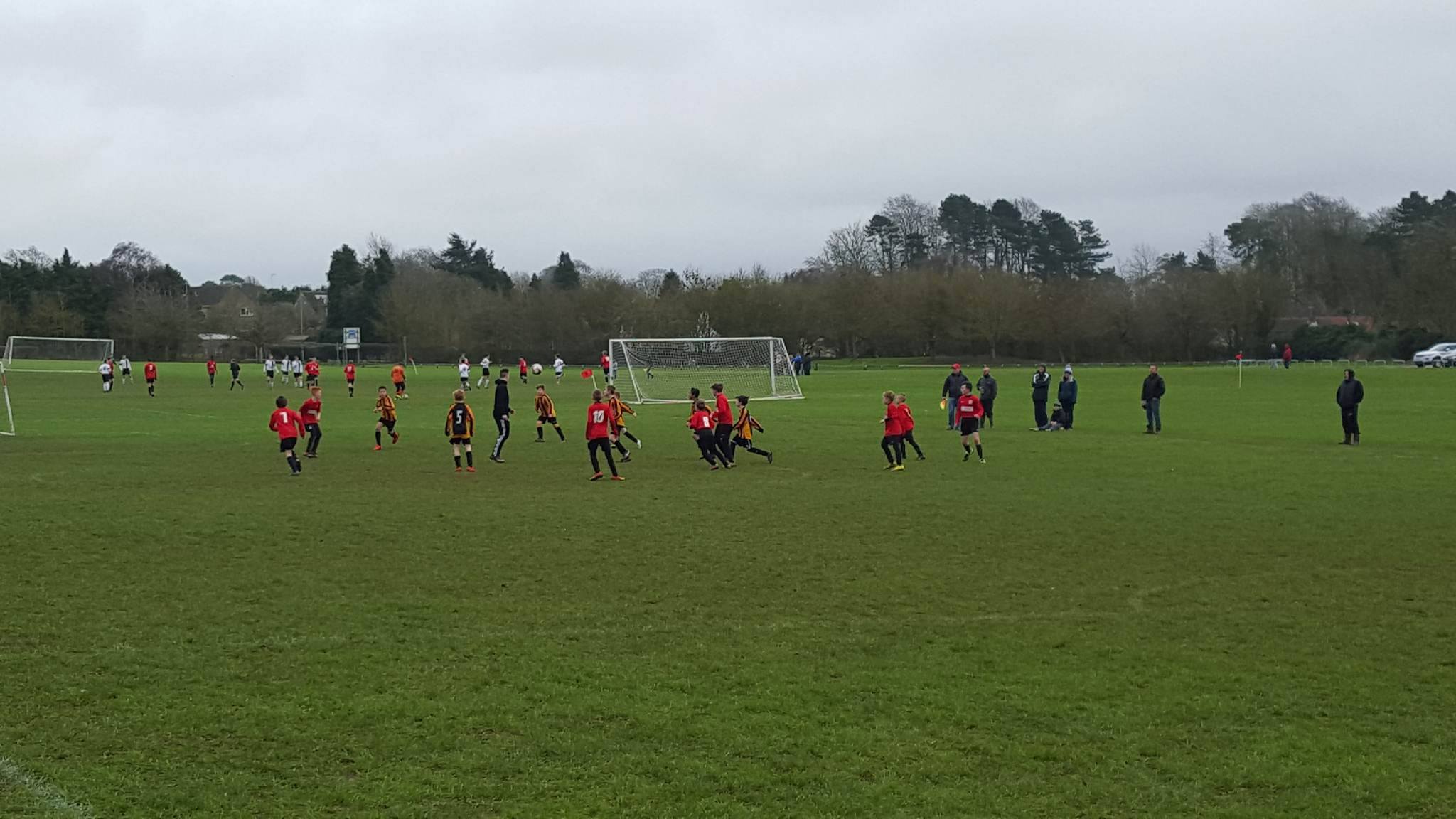 Both Avonvale and Swindon Rangers battled out a 2-2 draw in difficult conditions which made the playing on the floor difficult. Goals from Harry and Rhys Farrow in the second half with a number of chances going missing.

A closely fought game which Stratton clinched with moments to go. George Tweedale scored for Wanborough from a Dan Franks assist and Finn Blunsdon scored from a kick out by Wanborough goalie Matt Goldfinch.

Will Webster scored a fine goal for Highworth Town Juniors T in their 5-1 away defeat against Wickham Wanderers.

With very difficult playing conditions this was always likely to be a scrappy affair and so it proved. Lydiard went in at half time 1-0 up thanks to a well hit long range free kick from Danny Wade. Probably deservedly so, on the basis of a greater desire and commitment. In the second half Highworth went through the gears a little but were perhaps fortunate to get back into the game. A looping cross / shot from Tyler Simmonds found the back of the net with perhaps some help from the wind. Highworth went in front when a lovely curling effort from Connor Robb rattled the post but was bundled over by the opportunistic Brandon Lewis. Harrison Jordan extended the lead with some tenacious play just inside the area and a well taken finish. Jordan then added his second and Highworths fourth with a sublime side footed volley following some great work and a pin point cross from Jack Paines. Connor Robb sealed the points with a wonderfully taken curling free kick that nestled inside far corner.

Lois Beer scored a stunning late goal to earn Northside Athletic Colts a 3-3 draw against Lydiard Youth. Cory Adams opened the scoring for Colts before Lydiard replied just before half time. George Wilkins made it 2-1 before Lydiard scored twice. Beer with her back to goal on the edge of the box, turned and fired a superb strike. Tyler Rushton & Ronnie Collier both had good games for Colts.

14/02/2016 – Ferndale returned to winning ways and the top of the table after a long break due to postponements. In muddy conditions Ferndale scored two quick goals from Maciej Demidowicz but missed several other chances. In the second half close range finishes from Kieran Dodson and Dan O’Brien completed the scoring. Player of the match was awarded to Alex Parker.

Ashton Keynes looked to make the most of the blustery conditions with some early pressure resulting in a number of unsuccessful chances and attacking set pieces in the opposing half, this created the first goal when a neat lay off by Will T found Lewis G free on the edge of the box who unleashed a unstoppable left footed strike which nestled in the top corner of the visitors net. Odds were even then until the interval with Pewsey rarely venturing out of their own half and displayed a stubborn backs to the wall performance. In the second half both sides came out rejuvenated; which saw the game open up and become quite scrappy but hotly contested. With Pewsey growing in confidence and building a head of steam with the wind now in their sales, Ashton then caught the visitors on the break with a explosive run from his own half by Will T; who delivered precisely to find Ashton front man Ewan P to get his seventeenth of the season! The remainder of the second half was closely contested in the middle of the field but with a classy defensive second half performance from the Ashton defence and goalkeeper they managed to hold their two goal lead until the final whistle.

Man Of The Match: Will T

Aiden Bennett scored a second half equaliser for Highworth Town Juniors T in their 1-1 draw against Brinkworth Cats Red at the Rec.

A fantastic semi final match took place between Liden Community White and Croft Junior Red. In difficult rain and windy conditions, Liden took the lead before Croft equalized before half time. Croft then went ahead in the second half before 2 goals late in the match put Liden back ahead. But not yet done, Liden conceded a penalty and Croft made it 3-3 from the spot with 2 mins remaining. No further goals in extra time, the match settled on penalties. Liden scored their first 4, however Croft saw 2 of their penalties saved well by the opposition keeper, to send the Liden into the final.

Ferndale held a commanding 3-0 lead at half time in their County Cup tie against Broad Town Colts but two late goals for Broad Town meant Ferndale had to hold on for the final moments of the game to ensure they entered the semi final stage of the competition. Brandon Page, Dawid Osinski and Bailey Gallagher were all on the scoresheet for Ferndale in what was an excellent team effort that saw noticeably good performances from Dexter Barrett, Callum Barrett, Bailey Gallagher and Kyle Meader-Harris.