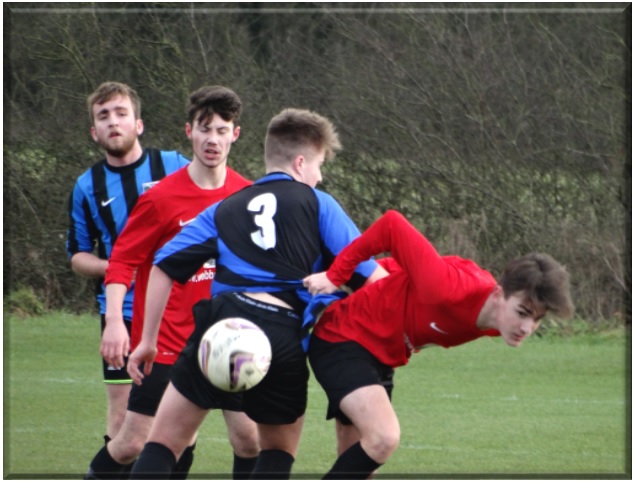 A closely fought match, Wickham 2 goals up after 2 minutes. Wanborough’s Will Sumner scored a great left footed strike from 25 yards out top corner and then set up Dan Eastell for Wanborough’s second. Wickham scored in the last minute for the win.

Highworth Town Juniors T took the lead through Jack Bourton’s first goal of the season against Stratton Juniors Black at Meadowcroft. Stratton levelled and drew ahead before a fantastic finish from Dan Sampson drew Highworth level again with Stratton grabbing a winner in the dying minutes.

Ferndale returned to winning ways and the top of the table after a long break due to postponements. In muddy conditions Ferndale scored two quick goals from Maciej Demidowicz but missed several other chances. In the second half close range finishes from Kieran Dodson and Dan O’Brien completed the scoring. Player of the match was awarded to Alex Parker.

An entertaining draw played out at Beversbrook between FC Calne & Highworth Town Juniors H. Calne took the lead against the run of play 5 minutes before half time, before scoring a second shortly after the restart. Highworth fought back well with Ben Law scoring on the hour and Adam Holmes equalizing 5 minutes before fill time. Calne goalscorers were Thomas Redpath and Luke Child